Interviewed by Daniela, Valentina, Margherita and Benjamin in her room of the flat she shares with her son in Konstantinovka on April 9th, 2013. Text in square brackets serves as explanation and commentary added by the interviewers.

I was born on January 15th 1926 in Zhytomyr. In my family there were three children. My father, Vasiliy, was a teacher, my mother, Vera, a secretary. We were very poor.

The autumn I was sixteen, police arrived with dogs and took everyone of a certain age – including me. I didn't have time to take anything with me from my house. They immediately took me to a train wagon. On the way to Germany they didn't feed us. We were traveling like sardines in a can. 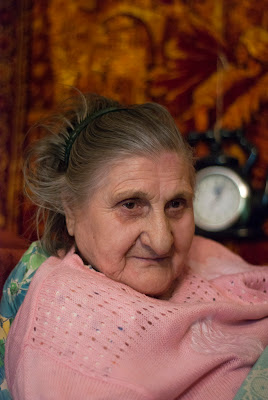 When we arrived, it was in the city of Wuppertal, they ordered us to wash. Two Germans sprayed us with cold water from a hose. I was sent directly to a glass factory. There they divided us between different jobs: Someone to cut, someone to pack. I was working on cutting the glass. I was very afraid of the Germans. They paid us two Marks per month. We were treated like prisoners, but they didn't beat us in the factory. Instead they punished us with cold showers. There were two guards. One was a very cordial and good person, the other bad: He was a true fascist. I could understand some German because I learned it in school. We also had a translator. In the factory, which was very warm because of the machines, there was a bathroom and we could wash with warm water, but we didn't have any soap.

We were living in barracks in one half of the lager, in the other half there were Polish prisoners. In the room we were twenty-five people. We were sleeping on two-story bunk beds. There were also some wooden cupboards. Our clothes were white shirts and trousers with blue stripes, on my arm I had to wear an "OST"-sign. From the trousers I made a skirt. But in the winter it was very cold. The Polish prisoners were treated better than us. While they were feeding us like pigs, they were feeding the Polish people better, separate from us. Sometimes they let them bring us a little bit of bread or potatoes. But they were feeding us very badly. Sometimes we received letters from home. They let us write back, but very rarely. Sometimes even packages from my mother arrived with bread, two hundred fifty gram. We divided it between the people. I was so happy. Sometimes the guards were giving us a little "butterbrot", but they were afraid themselves that someone would catch them. I had one friend: If we had some food, we'd share it.

Once when I was working I cut my hands because we didn't have gloves. My arm started to get bad from the infection, and we never got any medicine. I wasn't even able to put on clothes. We were forced to work day and night, working as hard as wolves. They were loading and unloading freight wagons. Sometimes potatoes arrived by train and they were unloaded to a bunker-like building. We stole and hid some, exchanging roles of thieves and lookouts between us, then cooked and ate them. I was hiding them under the mattress where I was sleeping. If they had caught us they would have killed us. We were all thin as fingers.

There were very, very, very bad people and very, very, very good people in Germany. I was surprised at the ideal cleanness in the country. On Sundays we had holidays if there wasn't work. Once we went to the city looking to buy [unclear]. But when we opened the cans we found small frogs inside. Some of us had already eaten some. They got sick.

Later I was working in a house. The woman brought me around and showed me how I must put everything into order, to clean. She liked me very much, although I think she was afraid of me because I was hungry when they had plenty. She was a very good woman, a person full of heart. She was saying that she wanted to "dress me up like a doll". She also said she wanted to help me, but she was afraid. Her husband was bad, he was a policeman. Until I cut my leg I was bringing around another girl so she was always with me. She stole everything she could get her hands on. I never stole anything. The woman died when a bomb fell on the house. I was very, very sad.

I was in Germany for four years. We were set free by Americans but I personally didn't see them. When they set us free they gathered us in a lager. [It's not clear whether it was the same one they had been kept in the previous year, or a separate one, or why Panicheva Vasil'yevna didn't see any American soldiers personally.] They loaded us into cattle wagons and brought us home. But there we were greeted as "enemy of the people". After coming back I was working in a kolkhoz. 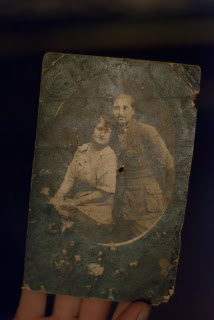 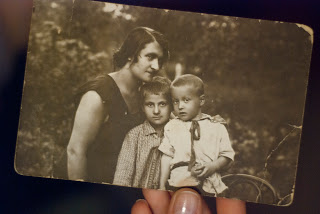